Itty bitty ones and screen time 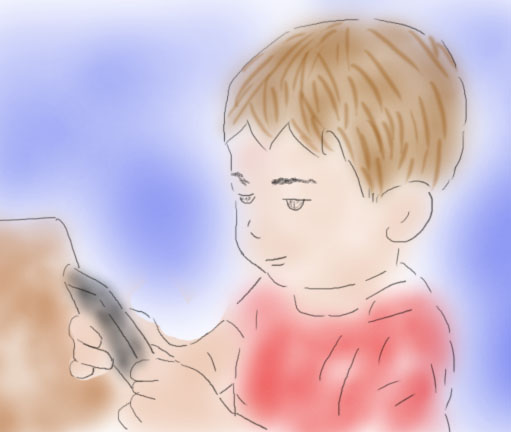 Screens! There are so many. And they are everywhere. Even AAP relaxed their screen time recommendations in recognition of the ubiquity of screens. I remember when my little one was born, AAP recommended no screens for children under 2. Current recommendations relaxed the no-screen age from 2 years to 18 months. Like many other things related to parenting, I have been flying by the seat of pants, and experimenting as I go along. Here are some observations from our ongoing screen time adventures.

Under 18 months? No screens for you: We did not adhere to that. Part of it has to do with very different approaches that me and my husband take to screens (and parenting in general). I was the stickler in the beginning, determined that my child would view no screen until 2 years. Husband is several notches more laissez faire than me, felt screens were fine birth onwards. After several battles, a compromise was reached. I don't recall the exact age, but it was somewhere between 12 and 18 months.

So many screens and so little time: At first, I didn't distinguish between different kinds of screens and let the toddler do as he wanted. TV? Sure! iPhone? Why not! Laptop? Here ya go! But then I dialed it back quickly after seeing him flip from one video to another at a dizzying pace on the touchscreen phone. My toddler has pretty good attention span for doing tasks, but watching him with that level of stimulation gave me future ADHD nightmares. For now, I have stuck to less interactive screens like TV. Watch a show. Finish viewing. Turn it off.

Screen as a pacifier: Kids and restaurants don't mix well together. "Twenty minutes in a high chair is about all you can reasonably expect from a toddler... Little bodies need to move" When he was having a meltdown, initially a smartphone seemed like a very effective pacifier. Avoid the angry stares from other patrons. Enjoy our meals in peace for a little bit. But then our child became Pavlov, and we were his little rats. When every meltdown was rewarded with a phone, they just became more frequent. Eating out is an important social skill. Sowing seeds for that ineptitude so early didn't quite sit right with me. So I stopped caring about strangers stares. If the meltdown was too intense, one of us walked out with him until he calmed down. Now instead of playing with a phone at a restaurant, he plays with his food. Baby steps!

Screen as babysitter: AAP recommends against using screens like electronic babysitters. Easier said than done! As I discussed some of my childcare challenges with limited financial resources in a previous post, this is the rule I feel guiltiest about breaking, but I continue to break it anyway. In AAP's ideal world, "parents should co-view media with children to help them understand what they are seeing". In my real world, while my child is glued to the front of a TV, that is some precious time to hastily get stuff done. However I did find a workaround through a loophole for that AAP recommendation. Toddlers love to view the same thing over and over. We cut the cord and watch most of our TV via Netflix/Amazon Prime etc. I watch a few episodes of some shows with him, and then play the same ones over and over for him.

All programming is not created equal: I have found PBS to be the highest quality, though even with PBS, not all shows are equally good. By far my favorites are Sesame Street, Daniel Tiger and Peg+Cat. There was a even a study showing correlation between Daniel Tiger viewing and children's emotional intelligence. Adding anecdotal evidence, I have taught my son to apologize using the episode where Daniel Tiger learns to apologize. And to clean up after himself using Daniel Tiger's jingles "Clean up, pick up, put away. Clean up, everyday".


Practicing the preaching: All this fussing about my toddler and his screen habits have made me rethink my own screen time. Excluding unavoidable screen time (work/school related), I tried to take an inventory of the my avoidable screen time. I am not much of a regular TV watcher, my biggest avoidable time sink was checking social media on my smart phone. A strategy that I have had moderate success with involved creating extra hurdles to view social media. You can read about it in greater detail at my blog here. Less time with my face in a screen meant more time being present (actually present) for my munchkin.

It's been a bumpy ride but I feel like we have reached somewhat of a steady state with our relationship with screens... for now. But these pesky children keep growing up, ensuring that the steady state will not stay so for long. Screen time for kiddos has been in recent news, with stories of links between increased screen time and diabetes risk and teens replacing drugs with smartphones. Even without those scary stories, I am dreading navigating the whole wild world of smart phones, video games, internet and social media when my itty bitty one is no longer so little and outgrows PBS Kids. Mothers in Medicine with children of all ages, share your own screen time adventures. What has guided your approach to your children and screens? What screen related rules do you use in your house? Did you have it all figured out or do you fumble around like me?
Posted by Mrs MD PhD 16 comments:

Email ThisBlogThis!Share to TwitterShare to FacebookShare to Pinterest
Labels: Mrs MD PhD, parenting, screen time, technology
Older Posts Home
View mobile version
Subscribe to: Posts (Atom)
Mothers in Medicine is a group blog by physician-mothers, writing about the unique challenges and joys of tending to two distinct patient populations, both of whom can be quite demanding. We are on call every. single. day.