Marching with my middle schooler

Wasn't going to make her go, but was thinking it might be the experience of a lifetime.  I wasn't sure how safe it would be, but I decided I'd ask her to think about whether she wanted to go along with me and a few of my out-of-town friends who would be coming to DC for the Woman's March on Washington.  My middle school daughter thought about it for less time than it takes to eat a spoonful of mac and cheese and said, "YES, I'm definitely coming!"

So we reviewed over the next few days a few key concepts.

Oh, and later that night, she said, her exact words, "It was the experience of a lifetime."

Indeed, I hope she (and all) have a lifetime of equality and choice and freedom and diversity and democracy.

*though we eventually got separated, was wonderful to take an "MiM Metro" to the March with Gizabeth and KC!
Posted by T is @Kind4Kids 8 comments:

When Trump was elected into office, a small movement began on Facebook, one that resulted in the largest march in history. When I texted KC, it was still in its infancy. I had the time blocked off for a conference in Vegas. I've never been to Vegas, but decided it could wait another year. "KC, do you want to march?" "Yes." I booked plane tickets to D.C.

I know KC doesn't want this blog to be political. Neither do I. I've read all the perspectives, Trump garnered many of the votes. I've read lots of essays and novels: I get why so many women and men voted for him; it's a vote to try to change a corrupt system. His presidency is a blip in history; albeit one causing a lot of anxiety. While there were many signs that were anti-Trump, there were many more that were pro-women. That's why we gathered. For Democratic principles.

My friend Ramona knitted us the requisite "kitty-kat" hats. I think we looked adorable. Her daughter, age 12, got the third one and wore it better than we did Saturday night at dinner in their home. 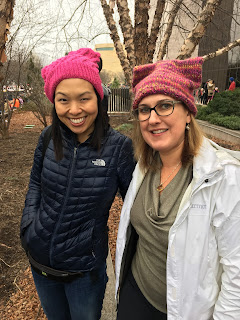 KC and I, in front of the Air and Space Museum, Women's March, day after the inauguration.

For those of you who think we even knew where the speakers were, kudos, because we couldn't figure it out. There were so many women. At one point, we tried to get next to the Jumbotron, and regretted it when we were squashed and shoved and it took us thirty minutes to travel thirty feet to the freedom of the Washington Mall. I watched the speeches the next day on YouTube.

Nothing lost in missing the speeches though. We saw lots of women and men with posters. We took pics. We found a high perch, relaxed and ate almonds and Cliff bars. When it was time to March at 1:15, we traveled to the marching site nearest us.

At 2:00 we still hadn't moved. A few women and men started chanting: "Forget the March on Washington, we are taking a Stand. This is the Stand on Washington." I got defensive. "I'm marching, if only in place. It's still a March. My feet are cold. It counts, right?"

At long last we eventually joined the March. It was everything my pulmonologist friend from Philly, one who I tried to meet but missed, raved about on text. "This is amazing and energizing! I'm so happy to be here. I'm sad I missed you."

There was lots of signage, but I decided to skip doing it myself so I could take lots of pics. There was one in particular, one of 50-100 that I took, that touched me the most. 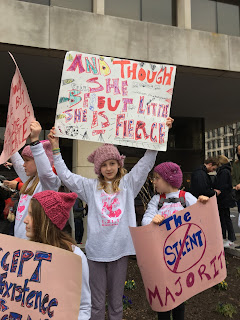 And though she be but little she is fierce.

Email ThisBlogThis!Share to TwitterShare to FacebookShare to Pinterest
Labels: Gizabeth, Women's March on Washington
Older Posts Home
View mobile version
Subscribe to: Posts (Atom)
Mothers in Medicine is a group blog by physician-mothers, writing about the unique challenges and joys of tending to two distinct patient populations, both of whom can be quite demanding. We are on call every. single. day.