Mindful Parenting and a Toenail Drama 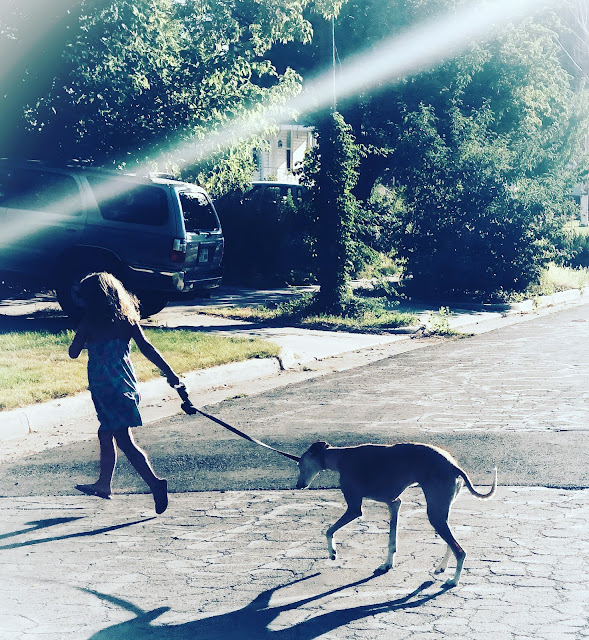 It started back in May. She dropped her stainless steel sippy, and the bottom rim landed right in the middle of her big toenail. For hours, she was beside herself. All we could do was kiss and hug her and say, “Yep… it sucks to drop something on your toe.”

It was the first, but it won’t be the last. A week or two later, there was a good-sized, eggplant-colored bruise right under the nail. Welcome to the Black Toe Club. She didn’t seem to care too much about the discoloration, and we went on with life as normal.

Fast forward to a week ago, when I noticed that the nail was starting to unroof itself. It became so… flappy... that it started to catch on things, which resulted in fits of pain and crying. Being the Doctor Mom that I am, I devised a treatment plan involving an epsom salt bath followed by lidocaine ointment and a sharp pair of scissors. But after the bath, she had a freakout.

She WOULD NOT let me cut it. Would not let me even touch it. We fell into a cycle of hugging and talking and attempting, followed by pullback and more crying.

Me: “This is the best way to deal with this. Otherwise it’s just going to keep catching on things and eventually rip off, which will be even more painful. Trust me! I’m a doctor! You just took a bath! It’s soft right now! Let me cut it!”

This went on and on, extending past bedtime. And repeated for 3 days. The toenail would catch on something, even bleed. It separated further from the nail bed until it was sticking straight up in the air. I got so frustrated… if you’re a physician, you’re likely familiar with the experience of family members not taking your medical advice. All those past memories welled up, compounded by a screaming, inconsolable child.

One night I threatened to rip it off after she went to sleep. One morning I told her we weren’t going anywhere until it was dealt with. We devised different plans, all foiled by her going into a crying fit… and when one involved her dad helping to hold her down, he looked at me with his peircing eyes and said straight up, “What are you doing?”

I was trying to control the situation. I was worried for her, anticipating the great pain she might experience if the toenail ripped completely off on its own. So instead of letting things take their course, I tried to solve the problem for her. Like lots of well-meaning parents these days, I was coddling.

I was acting on my own aversion to the appearance of her toe (as a self-confessed Picker, if it were my toe I would have cut that flapping nail off immediately despite any pain pemature action might have caused). The sight of it bothered me more than it bothered her.

I was using logic to appeal to an illogical, 4 year old little human. Although I want to respect her as her own person, she’s not a little adult. Yet I sometimes talk to her like she is.

I was trying to control someone else’s body. Someone’s body that is not mine to control. And I was using threats (again) to try to get what I want.

These are all Respectful Parenting fails.

Before even having kids, we decided that respectful parenting was the kind of parenting we wanted to do. I read books like The Gift of Failure and The Conscious Parent. I listened to Janet Lansbury‘s podcast. But like so many things having to do with mindfulness, theory is different than practice. It’s easy to have a plan, but what matters is how you act in the moment of need. Sadly, this time it took me approaching the use of force to realize how far I had drifted off the path I meant to be on.

Defeated but brought back to reality, I admitted I was wrong. This was wrong. My emotional bank account depleted but not quite in default, I was able to salvage the day by taking responsibility.

She put on flip flops with her little nail sticking straight up, I tried not to look at it, and we went about our day. I dropped her off at the gym childcare center, assuming I would get a call about another episode when she caught her toe on the playground or something.

But do you know what happened? When I picked her up, the nail was gone! She hadn’t even noticed it fall off; it didn’t hurt a bit. After all that, leaving it be was probably the best thing to do anyways.

I’m so lucky to have her (and him); I’m always learning from them. Being a parent has been the greatest lesson in mindfulness.

(A version of this post first appeared on the blog practicebalance.com)