Dinner of Champions/ Freebies From My New Book 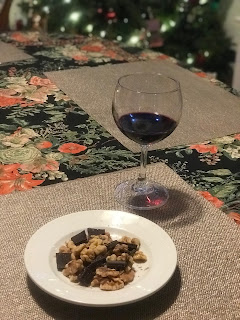 Yes, this lovely photo of walnuts, dark chocolate, and red wine against the backdrop of Christmas was my real dinner.

This was several weeks ago. Hubby was traveling. I'd worked a long clinic day, and had just picked the kids up from my mother's. My school-age kids ended up with yogurt, fruit, and cereal, while I ended up with this dinner of champions.

But it's not a bad dinner, from a nutrition standpoint. Actually, I was rather proud of what I'd put together, for cardiovascular reasons.

After all, I've done my research: I've just published a book on this! Healthy Habits for Your Heart is a behavior change focused evidence-based diet and lifestyle book for heart health. I was a bit insane about including the supporting science, so the references section is way larger than the publishers wanted. The first section of the book is all about how our behaviors impact our heart health, and how to approach habit change. Then, for each suggested diet and lifestyle habit, I've included tips to make it stick.

Want a free preview? Here you go! Pasted directly from the book, to you! 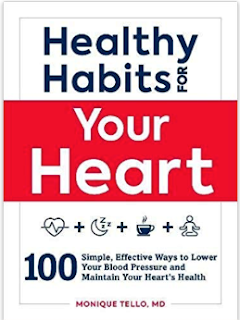 I hope folks find it helpful for them and for their patients.

From Chapter 5, Eat For Your Life: Nutrition Habits, here is the lowdown on nuts, chocolate, and wine:

#34: Eat Four Servings of Nuts Per Week
Nuts are good for your heart and your life. Research shows that eating four servings of nuts per week was associated with a significantly lower risk of having coronary heart disease (19 percent) or any type of cardiovascular disease (28 percent). ere was also a significantly lower risk of dying from coronary heart disease (22 percent), cardiovascular disease (22 percent), sudden cardiac death (75 percent), or anything at all (19 percent). e studies looked at tree nuts (which include almonds, walnuts, pistachios, and hazelnuts) as well as peanuts (which are technically a legume but nutritionally similar to tree nuts).

Another study found that for every one serving per week increase in nuts, there was a 10 percent lower risk of having coronary heart disease. is may be due to the fact that nuts are a rich source of healthy oils. Nuts also are great sources of both soluble and insoluble fiber, as well as vitamins and minerals. Nuts are an important part of the classic Mediterranean diet, which we know is a very good diet for heart health. (Allergies are a consideration here. For people who are allergic to nuts, this habit doesn’t apply. As a doctor, I’m going to remind you to update your epinephrine auto-injector and carry it with you at all times!)

What Does One Serving Size of Nuts Look Like?
Per the National Heart, Lung, and Blood Institute (NHLBI):

Tips to Make the Habit Stick:

#35: Enjoy Two To Three Servings of Dark Chocolate Per Week

Research has consistently shown that people who regularly eat chocolate have lower blood pressure, blood sugars, and less heart disease. Chocolate comes from the toasted seeds of the cacao plant, which is rich in healthy plant chemicals called flavonoids, specifically cocoa flavanols. Cocoa flavanols have beneficial effects on our blood vessels by neutralizing toxins, which helps prevent stiffness and plaque buildup, as well as promoting healing.
The darker the chocolate, the more cocoa flavanols it has. Milk chocolate sometimes has barely any (it can range from 10–50 percent) and also tends to have more unhealthy fat added. For this reason, I recommend only dark chocolate (at least 60 percent cacao, though the darker the better) and only a small amount. One serving is two small squares (about 50–60 grams total), and science suggests that two or three servings per week provide the most benefit.
Do you like chocolate, but not dark chocolate? It is less sweet but definitely much better for you than milk chocolate. e intense cocoa taste is what can help prevent us from overeating this calorie-dense treat. Start with a small amount and build up over time. The less milk chocolate you eat, the more dark chocolate will begin to taste like normal chocolate to you.

#42: Limit Alcohol, Although A Small Amount Daily Can Be Heart-Protective

People who drink a small amount of alcohol every day tend to have lower risk of coronary heart disease when compared to people who don’t drink or to people who drink heavily. Research shows that light drinking can lower the risk of developing heart disease a great deal (between 40 and 70 percent) and also lower the risk of related diseases such as strokes, aortic aneurysms, and peripheral arterial disease. Wine (red wine especially) seems to be the best choice, though the protective e ect is seen with all types of alcohol. e active component in red wine is thought to be an antioxidant plant nutrient called resveratrol, but studies that have isolated this compound and given it to participants as a supplement have not shown any promising results to date. (Of note, that seems to be the case with all supplements.)

But this doesn’t mean it’s advisable to pick up a drinking habit. Alco- hol won’t erase the risk brought on by other factors. Drinking any amount over what’s recommended will actually increase the risk of heart disease by causing high triglycerides (a form of cholesterol), high blood pressure, and weight gain. Alcohol can also be directly toxic to the heart and is asso- ciated with arrhythmias like atrial brillation. Drinking too much—even just a little too much—also increases the risk of cancer (particularly breast cancer), liver disease, and, obviously, alcohol addiction.
For all of these reasons, the American Heart Association recommends that people do not start drinking alcohol as a means to lower their heart disease risk.
For people who can safely drink, and who partake regularly, here is what is recommended:

Definition of a Drink:

Posted by genmedmom No comments:

I learned a beautiful new word this week - exceptionality

I am on my community health rotation. One of the best parts of being a resident are the off-service rotations, which means less time at the grindstone of patient care after learning after patient care after learning and a little more time to breathe. I got to spend a day with a public school nurse in the metro area school system. I graduated with less than 50 kids in my rural high school graduating class, so touring a public metro school system was eye opening, especially as I toured the schools where the kids were >90% free/reduced lunch. Both as a doctor and as a mother.

The school nurses I met were all so gentle, patient, and kind. I watched at the elementary school as 3 kindergarteners came together for their pre-recess albuterol inhalers and impatiently watched the clock together with their little spacers in place. We talked about the special needs kids there as well. I don't remember the issue we were talking about in particular for one of the kids, but I remember the nurse saying (instead of "part of his disability is...") "Part of his exceptionality is _______". She said it with a knowing smile and a twinkle in her eye despite what I'm sure was a frustrating and time consuming issue for her.

We never really had a schedule. We floated around an elementary school, a middle school, and a high needs school. The nurses were so proud of their schools and their kids and talked non-stop about their goals and wishes and kept pulling me aside to show me other students that had made great strides. One of the middle school nurses was one of the most reflective listeners I'd ever met, and as she told me about the difficult parent interactions she's had, I thought about how much she could teach us as doctors about how to handle difficult patient interactions.

The last school we stopped at was specifically built for high needs cognitively impaired students. We walked into the school nurse's office just as she was calling an ambulance for a child's third seizure of the day. They told me they call 911 approximately once a month. I was additionally interested in this school because I'd never heard of it before 2 weeks ago - when a new teenage patient with significant cognitive delays and no prior records showed up in my office appearing agitated and on the verge of violence. I had a 15 minute appointment with them and wasn't sure what to do. I was referring him to the appropriate specialists but was debating whether I needed to start behavioral medications in the meantime as his grandma had told me he had been on some medication in the past. I had found out through the school system that he was already getting hooked up with basic therapies and they thought they were meeting his school-based needs at that time. Now I was at that school. I met the therapists, the numerous paraprofessionals, and peeked at the kids in wheelchairs and helmets and in all manner of disarrayed behaviors. I saw my teenage guy too. He waved at me across the cafeteria and when I talked to his teacher, I learned he was a "delight" and they had no behavioral concerns - and they spent all day with him. I learned about their functional based classes and even got to sample a cookie from the morning's cookie class.

I won't be in this metro area much longer. As I've said before, I'm looking for jobs - I have had several interviews and don't have a finalized plan yet, but I probably won't be in this community. It gave me professional inspiration to connect with my future school district and learn more about my community wherever I practice, but more importantly I have a new deep and profound appreciation for all teachers, especially for kids with complex medical/social/emotional needs and even more importantly school nurses. Especially the ones that appreciate the exceptionality. And as a mother of one healthy toddler, I appreciate all those that willingly spend their time among hundreds of children and/or teenagers every day.

May this inspire you to appreciate rather than tolerate an "exceptionality" this week. :)

Email ThisBlogThis!Share to TwitterShare to FacebookShare to Pinterest
Labels: appreciation, Kicks, residency
Newer Posts Older Posts Home
Subscribe to: Posts (Atom)
Mothers in Medicine is a group blog by physician-mothers, writing about the unique challenges and joys of tending to two distinct patient populations, both of whom can be quite demanding. We are on call every. single. day.