It was a random Wednesday that I was off from work. I was thinking of the possibilities. Oh the possibilities! I could do my ever piling load of laundry. Replenish the empty fridge. Or forget all that, and keep my toddler child from daycare and spend time doing something fun with him. Since starting intern year, it feels like our time together has became ever so scarce. Today I would make up for all that missed time. We could go to the playground, do story time in the library, visit the local children's museum. Endless possibilities! 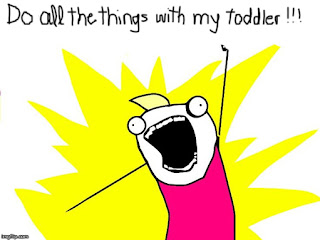 First things first, we'd eat some good healthy breakfast to get the day started right. Today I was in no rush. Instead of his usual sugary cereal breakfast, I was going to make eggs and toast. Now anyone who knows my toddler child knows food is a big struggle with him. He reacted to eggs and toast like I had handed him a plate of dog-doo. He put on a whole production. Defiant "I don't wanna". Pushing the plate away. Putting a bite in his mouth followed by gagging sounds. Finally, eating his food in infinitesimally small bites that he would take an absurdly large amount of time to swallow each bite. I was already questioning my decision to keep him home from daycare. I was now fantasizing the alternative of doing laundry in peace. 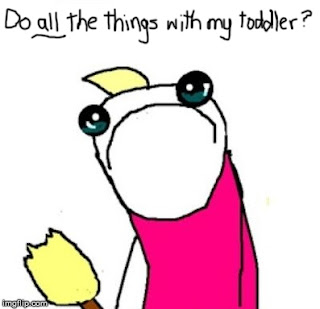 Finally after an hour or so of lingering, pleading, arguing over the table, I just had it! Out came the threat, "Child, you don't like the food here, I'll take you to school where you seem to have no problem eating the food. Forget about the museum or playground".
"Noooo"
"So you want to finish your food?"
"No"
"So which one do you want, go to school or go to playground"
"Playground"
"Then you have to eat your breakfast"
"No"
"So school then?"
"No"

Round and round in circles we went. And of course there were lots of tears involved!

"Alright then, let me break this down for you. You can go to school. Or you can finish your breakfast and we can go to the playground." Lots more tears. Then he said something shocking! "I want to go to school." I was not expecting this at all. Really!! He wanted to not eat that food so bad, that he would forgo museum and playground, something he normally loves to do! Well, I may have been bluffing a little, we were both in our PJs, not daycare ready. But it was too late to turn back now. I got dressed, got him dressed. All throughout in a shock, asking him several times, "so you want to go to school, not to playground?". Each time, "yes". Alright dear child, as you wish! 'This was incredulous', I kept thinking all the way on our tense walk to the car. Just as I was strapping him into his car seat, he said in a low voice, "I want to eat the breakfast".
In my mind, I thought, "Are you for real??? After all this, after I got dressed, got you dressed, after all those tears and drama, now you want to eat breakfast!!!"
Deep breath.
Aloud I said, "Have you decided for sure?"
"Yes", he said.

We walked back to the apartment in silence. He finished his breakfast without another complaint or tear. I'm happy to report, we had a great rest of the day in the playground and museum, of course peppered with occasional meltdowns here and there, but nothing quite so epic.

I was amazed and strangely proud of my offspring's skepticism. For not just taking my word, but for calling out my bluff with his own bluff. Keeps growing up so fast, keeps me on my toes. Teaching me that,
1. I must be fully prepared to carry out any threats I issue or rewards I promise, and,
2. Conversely, I can not make threats or promise rewards I can not execute

(Credit: Images from the hilarious Hyperbole and a Half, which can now be generated into endlessly entertaining memes)
Posted by Mrs MD PhD