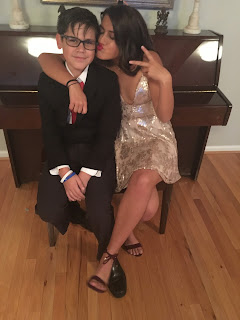 
Baby's official due date is 4 days away.

We are as ready as we are going to be. The hospital bag is packed. The date night(s) have been had. My last day in clinic was 4 days ago.

And I am going crazy just sitting here, waiting.

My husband is too - a few nights ago I was feeling uncomfortable/crampy, and he read to me off Google that "being uncomfortable might be a sign of early labor" - but then I took a bath and felt better and we were both disappointed.

I never understood women that were "so done" with pregnancy until I hit 38 weeks. After all, childbirth doesn't look like a whole lot of fun and I've never seen the point of trying to hurry it along. However, at 38 weeks, all of a sudden, sitting sucked, standing sucked, walking sucked, and so did laying down. My clinic patients would catch me wincing at work while waddling from room to room. One of my most complicated patients who has multiple serious concerns at each clinic visit told me I should probably go home and take it easy. Another one caught me making a face while I was auscultating his heart and told me he was afraid I was going to have the baby right then and there. No longer scheduling me in clinic was probably a good idea.

The rest of the last three weeks have been filled with research elective time. I thank my lucky stars my program director has had enough pregnant residents to know that research would be a great use of my time leading up to baby. I have probably been driving my research mentor crazy - I have nothing else to do to distract myself from the waiting and the constant discomfort, so I've been working ridiculously hard on my research project and I have a tendency to send her these long detailed emails only a day after we've met and hashed out the details on the last one.  I also find myself spending a lot of time on Google reading terrible parenting/pregnancy advice on blogposts (obviously not this blog!) and also relevant medical literature on PubMed to my situation (Fun facts: 30% of women will try some kind of non-pharmacological measure to try and start labor. And there is good evidence behind "membrane stripping" with a number needed to treat of 8 to prevent a formal induction!).

I haven't had this many nights/weekends off in a row since before med school clerkships. We've stopped making any sort of plans on the weekends. Last weekend I couldn't handle the not busy-ness any more and spent a day making 10 of those freezer meals for when we don't feel like cooking (never done that before).

I know I will want to cherish these moments of quiet, of resting, of the calm before the storm, but I still find myself silently pleading with baby to hurry up and meet us soon.
Posted by Kicks 5 comments:

I’m currently mid staycation with my daughter, and I disobeyed my own advice.  I overplanned.  As a result I set myself up for constant disappointment because, I AM TIRED.  I’m now re-grouping and re-thinking.  Just getting done what I can, hanging out with my girl and enjoying her warm little hugs - realizing it doesn’t matter if we make it to every museum and live kids music performance and puppet show imaginable.  She just wants to hang out and read Rainbow Fairy books.  I have the same bleary eyed overwhelmed tiredness of residency staycations, and it’s a little bit of a revelation.

Attending life is full of new challenges.  I have called patients and set up appointments and reviewed pathology this entire break.  I can’t emotionally separate from what is going on.  There are many good changes - I do have increased control over my schedule, autonomy, and there is a more personal sense of fulfillment.  But, I am still so tired.  I feel constantly behind at home and at work - there is always more to do.  Part of the reason we’re having a staycation is just I didn’t have the energy or time to plan a proper vacation.

So, I’m writing this post as proof that from this moment on I will close my laptop and try to unplug.  And in a few days I will be back, hopefully energized just a bit so that I can keep moving.

Mindfulness or multi-tasking as a mother in medicine

And then she said, “Wait what?”

As a mother in medicine, are you engaging in mindfulness, or are you a multi-tasker?  Perhaps that’s too simplistic of a question, as it’s not necessarily an either/or.  The complexity may rest in which of these two are you striving for?

And, what about when the people aren’t fully present with you?  I’ll wait… And I’ll aim to make being there, being here, worthwhile.

Maybe the key is to be mindful and fully present with people, and to multi-task effectively with things. But that may also mean you have to be around the "right" people and do the "right" things... the people and things that give your life meaning!

I guess it’s kind of a topic or conundrum for us, the busiest people.  And on that, do we agree that the busiest are the mothers in medicine?
Posted by T is @Kind4Kids 6 comments:

Email ThisBlogThis!Share to TwitterShare to FacebookShare to Pinterest
Labels: family, mindfulness, T, work-life balance
Newer Posts Older Posts Home
View mobile version
Subscribe to: Posts (Atom)
Mothers in Medicine is a group blog by physician-mothers, writing about the unique challenges and joys of tending to two distinct patient populations, both of whom can be quite demanding. We are on call every. single. day.