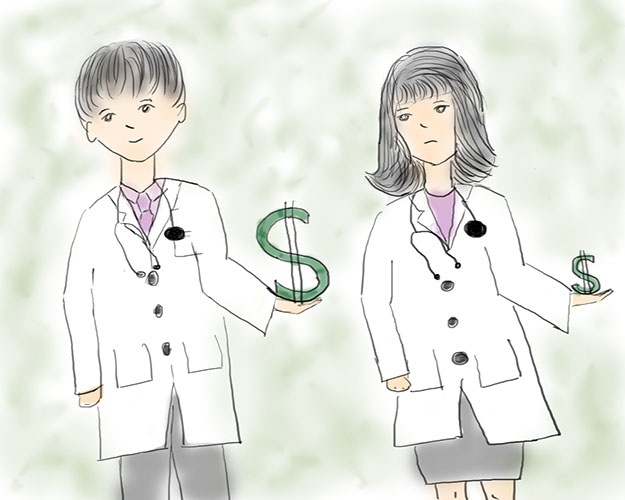 I am sure many of you have seen this recently published article about physician wage gender disparity in the New York Times. The original research article was published in JAMA Internal Medicine, and received a lot of popular press with mentions in the New York Times, Time magazine, Boston globe, Marie Claire and many others. I am always a little wary of science/research reporting. I sometimes try to read the primary research paper behind the news item, especially if the topic interests me. Pay equity for physicians is certainly a topic of interest for me.

This article put a specific number on the gender pay disparity: female physicians make roughly $20,000 per year less than male physicians. This is after adjusting for age, experience, faculty rank, specialty, scientific authorship, NIH funding, clinical trial participation, and Medicare reimbursements. This news came up in a non-work context with a male resident physician. He told me that the problem with these types of studies was that they don't account for the amount of work put in. According to him, "female physicians work less than male physicians". Well how do you mean sir? Do you mean more female physicians work part time? He said, "In my experience, women complain more and work less, period. They always have to go pick up their kids or some other excuse and they dump their work on me". Ugh! Alright then Dr. Curmudgeon.

The paper is well written and the research is pretty well done, I highly recommend reading. Sad statement, but female physicians being paid less won't come as a big surprise to anyone. Safe to say, I was being ironic in the blog post title. Gender based pay disparity occurs in the rest of the US workforce. The dicey question, which Dr. Curmudgeon raised, is the pay disparity unfair? It maybe unfair from a social standpoint. Women ending up with more childcare or household responsibility and not being able to match male productivity. But is it unfair from an economic standpoint? Are they truly being paid unequal amount for equal work? Is there is an inherent bias towards them? This paper suggests that there maybe a component of both social and economic unfairness.

Comparing unadjusted salaries, i.e. without taking into account specialty, faculty rank etc., the difference is even larger, $51,000 per year. It may be true that more women than men make choices that lead to being paid less, such as working in certain specialties or working part time. But women don't choose to be overtly discriminated against. The authors adjusted for a lot of factors that could explain the pay disparity and still found a gap of roughly $20,000. The authors lacked some information, most importantly, full time vs part time status. They did two things to counteract that. One, they used Medicare reimbursement in their multivariate analysis to adjust for clinical volume. Two, they eliminated bottom 25th percentile of income data, with the assumption that it would eliminate part-time workers from analysis. They are imperfect measures, but the best that could be done with the lack of available information.

I am pretty early in my training, and from my own limited experience, I do believe that there is at least some inherent bias. Dr. Curmudgeon is not an exception, there are more people like him inhabiting the medicine world. They may be outspoken about their biases, or maybe not, or maybe only in certain contexts. They may be aware of their biases, or maybe not. I suspect, a lot of Dr. Curmudgeons are even in positions where they can influence factors, like promotions and pays. If you have encountered one of these Dr. Curmudgeons, I'd be interested in hearing your stories in comments.
Posted by Mrs MD PhD