"Why didn't you just go to medical school?"

I'm guessing this is a common question posed to ARNPs/PAs, and one I figured I'd take a moment to answer personally, because I find it irksome. Well, I didn't go (or even apply) because....I didn't want to be a doctor!  I don't think it's a compliment to ask an RN/NP/PA that question, but I'm thinking it's meant to be one (i.e. you're really smart, you could've learned more/done more). But the question presumes that becoming a doctor is The Best Option for those interested in a professional graduate level healthcare career (and that the smartest people in medicine are always the doctors).  But becoming a doctor is one of several medical career options out there, and it's not always The Best One for everyone. So for this post I'm going to recount how I got to ARNPLand, given other possible paths-and how a key factor in going to ARNPLand was motherhood. Doctors are awesome (duh), but not all of us are destined for DoctorLand--for a variety of reasons.

My undergrad education was in liberal arts, which was interesting but frankly not very useful at all (a classic tale). I worked in social work right after I got my degree, and worked in social work/corrections for a while...but I wanted a job where I could DO things, and PROBLEM solve and really FIX things. And not be stuck at a desk all day long shoving paper around.

I knew that I wanted a job where I could do the following:


I also took into consideration how much I'd be able to see my kids, day to day--it was important to me to be around as much as possible...consistency. In some subspecialties (that involve years upon years of fellowship), fellows put in so many hours that it's a real challenge to balance the demands of motherhood and work--and year after year they face these dueling demands--and hats off to these women for taking it on! I see fellows in particular who FaceTime their kids nightly, because they're rarely home in time to say goodnight--especially those with young preschoolers. And sure, it's temporary--because kids grow up, stay up later, and so on--and fellows finish their programs. And fellows do have days off, of course, during which they can love their kids (in person) to pieces. But for me, I wanted more of the day to day mom stuff. The stuff that makes me crazy and the stuff I love.

My point is---to each her own. I have as much respect for the mother who is a general surgeon as I do for the mother who stays home full time. And really, it's great that those of us in medicine can FaceTime now to say goodnight to our kids so that we can maintain the daily connection despite our wacky schedules; I used to do it frequently when my twins were toddlers--I'd leave for work before they were up and get home after they were asleep. It was hard, we missed each other a lot. And it was a lot of extra work for my wife when I was gone, as she'd get through multiple 13-14 hr days on her own. So for any woman who is embarking on a medical career it's incredibly important to consider how one's choice of career will affect one's ability to parent in a way that works best for you, for years.  It's a huge, huge consideration. It's a years long balancing act--how on earth are you going to mix these two awesome things (motherhood and medicine) together successfully and keep your kids alive (and your patients)?!

I needed the work:life balance that I thought an ARNP career could best provide, and I was concerned that I wouldn't have been able to find had I chosen medical school. Or, I suppose that I could have found it eventually, but I would have had to put off having kids for several years--and I didn't want to do that, for many reasons. I couldn't be the kind of mom that I want/wanted to be had I chosen a different career path. And what about the difference in salary, you might ask? The money is great, I think. The starting ARNP salary in outpatient oncology around here is about 100k. Inpatient oncology at private hospitals around here? Around 130k. That's enough for me, enough for my family to live well. So I'll never be The Boss, I'll never be famous, but it's enough--I'm home over half the month (I work 10-12 12hr days a month), I often pick up the kids from school, I have the time to make dinner frequently (and lunches for school, ugh), I have a challenging/brain stretching/ emotionally taxing job and it's all enough. Score.

So this is my corner in the medical world, and I'm happy in it. And frankly, ALL of us are awesome for making our lives work-however we get it done. So here's a toast to getting by with FaceTime, nannies, dads, moms, friends, support groups, childcare centers, vodka martinis, grandparents, Munchery/Pizza Hut/Whole Foods/Amazon Fresh--we're getting it done--mothering AND medicine. 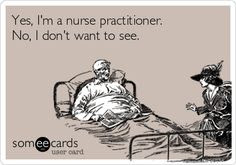