Our pediatrician had noticed something was up with our son at eighteen months. We were in complete denial until he was two years old. At that point, it just got too ridiculous. He couldn't say a word, only scream and bang his head on the floor... We finally made some phone calls.

Once we got connected with Early Intervention, we started to see and understand. Kudos to the very talented staff who gently- but firmly- suggested a possible diagnosis, and recommended a developmental evaluation.

Months later, we knew for sure. (I wrote about this: So Our Son Is Autistic, And It's Going To Be OK.)

Now, he's five, and he's doing great. Yeah, there's issues, but who's kid doesn't have issues? In his case, he's difficult to understand, but we are so very thankful that he's verbal. Toilet training is an ongoing frustration, but we know he'll get there. He's in a co-taught Kindergarten classroom and he loves his special ed teacher; he's got speech and behavioral therapy and OT, he and his little sister are best friends, and he's a happy kid.

We think he's fascinating, because his mind works so differently from ours. Hubby and I, we're both avid readers and writers. Though he's a sports broadcaster and I'm a doctor, we're both required to be advanced communicators: he describes and dissects sports action for the audience, and I translate medical information for my patients.

But our son is like, a little mechanical engineer. Hubby and I, we struggle with Ikea furniture assembly instructions. Hubby couldn't figure out how to install those little plastic cupboard door locks. I've had a car for three years and I can't remember how to open the hood, I have to look it up in the guide every time. Our son is such a different creature from us, in many cool ways.

He's absorbed by maps: He loves the maps app on our phones, and he studies the weather radar maps and draws out the storm patterns. Below, he's studying a map of Boston. We had to stand there for a long time. I can't even explain how many drawings of maps he'd done... Maps and highways, cars on highways. He talks while he's drawing: "Here's a map of Boston, and here's the cars going out of Boston on the highway, this is Route 93..."

He draws alot of complicated pictures, many moving parts. Below there's a picture he drew during a time of some upheaval in his little life: he was about to start at his new school, with a new teacher. The man in the middle is saying "Help" and "What should I do?" and chaos is erupting around him. He draws what he's feeling, what he's imagining.

He draws, I'd guess, probably between twenty and fifty pictures a day. Many of these, he will assemble into "books": he staples them together and then "reads" them to us. He's able to recite the same storylines over and over, even with his books that he made over six months ago. He seems to have a photographic memory.

He loves to take photos, in that he likes to study a subject by taking a gazillion photos and then examining them. Below, our big fat lazy cat; and then, me cooking. Studies of our home life...

But, we're also trying to figure him out. We're still learning how his mind works, and just now beginning to truly engage with him. It's really accurate, the autism symbol: the puzzle piece. He's our little puzzle. 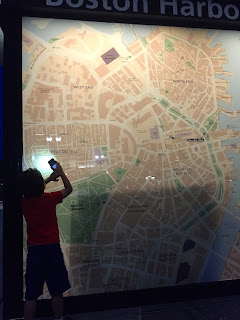 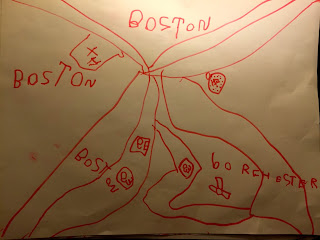 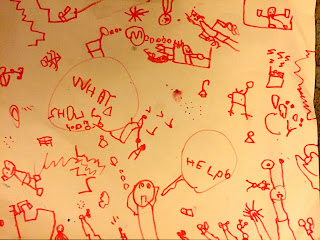 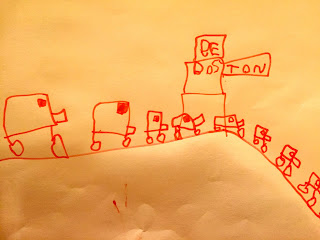 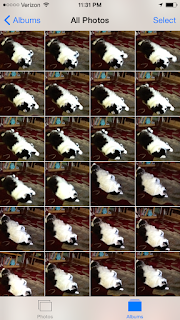 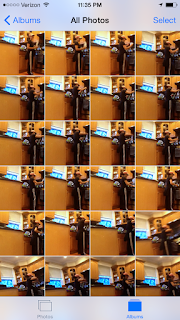