This one's not about mothering. Or medicine. But at least it has an "M" in front of it, so I'm plowing ahead, competing for the worst moving tale out there.

I've moved a lot in my life. My ex was pretty ADHD about buying houses, and I went along for the ride seven times in our thirteen year marriage. All in the same city; but it was pretty chaotic in retrospect, although simultaneously exciting and exhausting at the time. So I consider myself an expert on moving. No degree, but lots of experience. These last four years in the same house after the divorce were the longest years I've spent in one place since high school.

My boyfriend found this new house for sale while wandering the neighborhood - it's only two blocks from my old one but the space layout is much more efficient for me and the kids - and it has a large backyard with a creek running through it. It backs up to green space. We see a doe and her fawn from time to time - once while eating breakfast. The backyard alone is worth the price of the house, which was a lateral financial move.

I did the reverse of what all the books tell you to do - I bought the house, put mine on the market, and had a stressful Summer. But at the midnight hour I had some buyers come in with a good offer and I unloaded my old house before I had to pay two mortgages. They were living in a hotel, moving from another city, and wanted me out so quick I didn't have time to pack. I worried, but my neighbors said, "We always hire packers, you are going to love it. They bubble wrap the most ridiculous things, like toothpaste." A bit of a splurge, but considering I had no free time until the move I hired a packing and moving company with a decent reputation around town - I learned it was under new ownership since I last used them.

They packed so quick I figured the owner must have dispatched 10 workers. The day of the move, not this past Saturday but the one before, my boyfriend, kids and I were back and forth between the two houses. I had spent my Friday off lining kitchen and bathroom drawers. At around three in the afternoon I got a call from the movers - I was making a quick grocery run. "We have two trucks loaded and will be there in about thirty minutes, after a quick lunch." Game time.

On the way back from the grocery I drove by the old house on the way to the new - smiling at the lack of moving trucks. When I got to the bottom of the street to turn left toward my new house, I encountered a scene. Ambulance, fire trucks, police cars, tons of gawkers in the street. Everyone was looking at this: 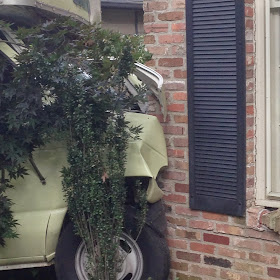 It was a moving van, crashed into the corner of a house. I tried in vain to wrap my head around how it might not be mine then decided to pull over and check it out. Apparently the truck's brakes went out ("We serviced them in house three weeks ago!" the owner assured me) and the truck careened down the hill at 40 mph. The passenger mover bailed out onto the street in fear, damaging his ribs, and the driver went to the ED with back and neck problems. One of the head movers I had gotten to know pretty well told me it was all my boxes, the furniture was on another truck.

The owners of the house that was hit - they were inside watching a Razorback game - said they thought a tree had fallen on their house (it happened to them two years ago during a winter storm - tree narrowly missed killing their son. They wondered aloud if this was a sign to get the heck out of the house). All the living room pictures flew off the wall onto the floor. The front door frame was off; a sure sign of structural damage. Windowpanes were cracked upstairs and down. I'm not sure I started off on the right foot as a new neighbor.

My stuff was finally offloaded to another truck at about 10 pm so the wrecked truck could be towed. My daughter and I brought the movers dinner. They had a messy job - crushed vinegar and bleach dripped onto their legs from wet boxes. My anxiety creeped in over what further damage was being done to the contents of my life. My daughter took this pic at the front of the van - scattered with my and my kids scarves and mittens; many boxes ruptured and contents flew. "Mom, look! The ultimate Elf on the Shelf. Funny it ended up on the dashboard." 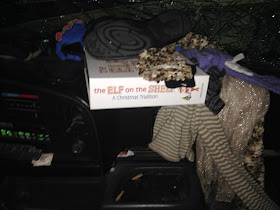 The owner blew in for about five minutes during the evening blustering and blowing off the event, worrying over his troubles, "Another of my vans ran over my employees' car last week! And now this!" without much empathy for my stuff. The next day no one showed up until 1:00 - my boyfriend and I worked for three hours until they arrived. We both got cut - there was tons of broken glass. I learned why the packing happened so fast - it was the most slipshod job I've ever seen. Unpacking was like an emotional roller coaster - joy at what made it and sorrow at what didn't. Hopes and talk of repair. Kid gifts over the years, vacation mementos, art, picture frames; all shattered. For the first time in seven years at my job, I thought of calling in. But work was comfort Monday compared to the chaos of the move. 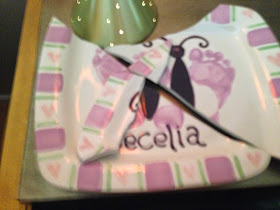 Caption: Cecelia baby footprint butterfly plate broken in four pieces: this is in the repair pile.

As the week wore on insult was added to injury. The entire contents of my bathroom was poured into one large box. Cleaning busted make up meticulously off of curling iron cords and plugs rendered unpacking each box a glacial event. Soy sauce off of every food item. As I opened each box, I kept expecting someone to pop out and say, "Guess what, you are on Candid Camera!" When the owner asked for the money for the move on Tuesday, "I thought you would pay me and then I would reimburse your damages at 60 cents per pound," I told him my damages had already far exceeded the cost of the move (I did tip heavily and buy dinner for the movers both nights). Twenty to thirty percent of my dishes and glasses and vases were crushed. I was so angry at the beginning of the week I was calling lawyers but by Thursday and Friday I was just sad and tired and defeated.

And now I am ready to move on and put it in the past.

My new house is awesome Jack has a zillion new friends they all play outdoors and ride bikes and run up and down the creek - he is in Heaven and not on his ipad quite so much.

My just as OCD as me artist/architect boyfriend and I spent the entire weekend making my house look amazing.

My daughter showed amazing empathy - giving up her goal of going to the new local popsicle shop that weekend (I snuck her there late Sunday in gratitude) for helping arrange, after her room, my medicine cabinet and kitchen.

Other moving tales I've heard that rival mine:

One of my partner's friends were moving out of state to Wisconsin about ten years ago; the truck caught on fire and they lost 90% of their stuff.

One guy I told knew someone who hired a not mainstream company - the movers took their car keys and came back in the middle of the night the next night and stole their car.

Funniest quote from the hell weekend, as told by my boyfriend:

"When you called me and told me about what happened from the scene of the accident, I was sitting on the back porch with C and told her. She said, 'I guess this means we aren't going to Le Pops tonight.'"

S said, "I'll bet going to Le Pops tonight is the last thing on your mom's mind. Our biggest job right now is to keep her head from spinning off of her neck. Let's not mention Le Pops."

To his and her credit, she didn't. Which is why I was moved to take her Sunday night - snuck away while the boys were eating pizza with the movers. She had salted caramel dipped in milk chocolate and finely crushed cookie crumbs. I had salted caramel dipped in dark chocolate and crushed almonds. We both declared, moaning between amazing bite after bite, that we very much deserved it.