"Education is the kindling of a flame, not the filling of a vessel." - Socrates

I was trying to set up a science birthday party for my son back in May. He was turning nine and wanted a mad scientist theme. I wanted a mad scientist to take the pressure off of me. I hit a wall with the local science museum, and decided to try the school to see if any high school students were interested. As the upper school administrative assistant was giving me the names of the science teachers, one rung a bell.

"Well, I don't know. Since she has been working here that has always been her name. I could ask."

After I sent a query I remembered a few months back when I was sitting at a low bleacher in the gym. My daughter was picked as the lower school representative to read a passage at a convocation and I got covered to watch and support her. She was confident and well spoken; it was a thrill to witness. As I glanced back at the audience I saw someone who looked like my high school physics teacher, plus 24 years (both of us!). Surely not, I thought. Now I knew I was wrong.

I left my phone number and she called me that evening. We were both rushed and excited to catch up (me more than her - she is eternally calm). She said, "I told my husband this is a first. To have students matriculating toward high school that are the children of a former student. I am overwhelmed." We planned an early morning before school meeting within the week. I met her in her classroom and we reminisced. We were her first class. I remember relating to her because she was young and enthusiastic and intelligent and female. She reminded me she had just come from California after training back then, but grew up in Arkansas. She charted her career trajectory - teaching to business then back to teaching - and I reciprocated. She promised to try to help me find a student for the party. She reminded me of the plaque we designed for her to commemorate her first class. I told her I thought I had a picture of our class giving her that plaque (it was a small class - numbered in the teens) and I would try to unearth it when I moved later on this year.

The students didn't work out, but that was for the best because my son was the scientist at his party and he was awesome. But the door I opened to my teacher was worth the effort. I e-mailed her after the party was over and invited her to lunch and to tour my work. I told her that if she had any interested students I would love to host them for something similar - I am always trying to recruit future pathologists. I was over the moon when she accepted and we set a date for mid-summer.

It was a Monday not too long ago. I was covering cytology, so radiology needles. I checked the schedule in the morning and asked for a window so I could eat lunch with my science teacher. The tech told me that 11:30 would work best, so I texted my teacher to set it up. The radiologist covering that day was accommodating.

"You are taking your high school science teacher to lunch? That is so amazing and inspiring. You are making me want to do something similar. But I didn't have any good mentors that I remember."

"You mean that you can't find anyone in your history to give credit for your current awesomeness?"

He smiled. "Well, maybe I can think of someone. I'll work on it."

After my third needle of the day I raced to the lobby to meet her. We hugged and had a good heart to heart over soup and salad - she insisted on picking up the tab. I showed her pictures of my son's birthday party. She said, "You are a true scientist. You hit some obstacles but didn't let it stop you from formulating a new plan. And it looks like it was a great success." I glowed in her praise, just as I did when I was 16 and I figured out a physics problem or successfully completed a lab experiment.

I showed her the Gross Room and Blood Bank and Microbiology and Histology and introduced her to most of my partners. I think she had as much fun experiencing a different world as I did when I alighted her classroom a few weeks back. We were interrupted by a student who was taking a make up test and needed help. I was awed by her calm reassurances and professional demeanor. I cannot wait for Cecelia and Jack to soak up her carefully and expertly doled out knowledge like the sponge I was back then. I hope she inspires them as much as she inspired me. 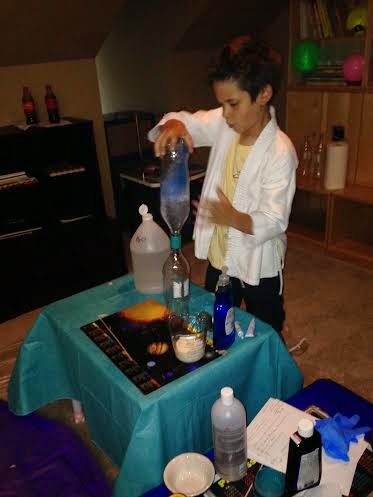 They are well on their way to becoming scientists. A little expert guidance always helps to kindle the flame.