Being tough while pregnant

I was recently talking to a friend of mine who mentioned that another mutual friend was eight months pregnant and he was impressed that she was still walking around. Of course, I was offended because I was still working when I was in active labor.

But then I realized that maybe that wasn't something I should be proud of.

When I was eight months pregnant with my oldest, I totaled my car in a highway accident. I wasn't seriously injured and only required a night at the hospital. The worst thing that happened was I hit my head and had a concussion and a really bad black eye. I felt like with my pregnant belly, I looked like an abused wife. This was pretty much what I looked like: 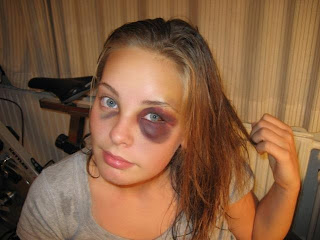 My chief resident called me and told me he thought maybe I should start my maternity leave early. I didn't. Instead I went back to work only two days later.

When I went back, I was convinced that everyone was angry at me because I missed a call due to my accident. In retrospect, I'm pretty sure everyone felt really sorry for me.

Was it dumb to push myself that way? Possibly. I got through it and made it until my delivery day. And then I got the benefit of my six weeks of maternity leave with the baby instead of home alone.

Your turn. What's the dumbest tough guy move you made as a pregnant lady?
Posted by Fizzy