Don't Trust Me, I'm a Doctor

Yesterday I got coverage to go to my kid's school to bring birthday treats - they are celebrating Summer birthdays before the end of the year, and Jack turns 8 on June 3.

I stopped at the hospital gift shop on the way out and bought a beautiful balloon, a "double bubble," it had clear plastic surrounding a pretty pink flower with a purple and blue butterfly on top.  The effect, I thought, was breathtaking and I couldn't wait to share it with Jack's class.  I considered sending the treats with him and skipping the class party in the interest of my large workload, but that morning at breakfast Jack asked eagerly but guarded if I thought I could make it so I determined that even if it meant staying late at work, I would.  He was thrilled.

It was raining cats and dogs when I pulled into the school parking lot at 9:35 - designated time was 9:45, so I covered the treats with my yoga mat and darted in the double doors briskly.  I stopped to check in with the secretary.

"What are they, do they have nuts?"

"Um, I don't think so - we've been eating them for years.  My kids hate nuts, and it's a fave, but I've never asked the bakery.  I got them from Sweet Love - they are called Ninja Turtles.  They are condensed cookie dough around homemade caramel with chocolate drizzled on top, they are amazing."

"Oh, never mind, I think the kid with bad nut allergies is in the other class.  But I'm going to have to ask you to take the balloon to your car.  It's a choking hazard.  I had to turn away a Mom bringing 18 balloons to the class the other day."

I looked at her perplexed.  "I'm so sorry, I had no idea."  She softened.  "Well, if you just bring it for the party, then take it back to your car, I guess it's ok, just the one."

I walked into the classroom with the box of treats.  The teacher introduced me, Jack gave me a hug.  She then said, "Do those have nuts?"

"I don't think so, but I've never asked.  My kids hate nuts."  The teacher pointed to a kid with nut allergies, the first kid that my son was excitedly indulging with treats.  I watched him take a big bite.  Jack finished passing out all the Ninja Turtles, and gave one to his teacher.  The children were munching happily; Jack was on Cloud Nine.

The teacher walked over to me.  "Can I see another one of those?"  I mistook her mood - thinking she loved them so much she wanted another.  She started dissecting the Ninja Turtle.  "I think these have nuts in them.  I got that nut caught in the tooth sensation."  I told her, "I'll call the bakery and find out for sure."  The baker confirmed a small amount of crushed pecans, and I relayed silently to the teacher in alarm.  She walked over to the boy with the allergy.

"I'll need to take you to the nurse."  He protested, saying that nothing was happening, while I reeled in horror but assured her that I would watch the classroom while she left.  I was in scrubs, pager on my hip, wishing I was back in my office at my scope, but worried about the kid.

I was at the helm, and I did well.  Another boy stood up, announcing his nut allergy.  Luckily he had already done this earlier and I watched the teacher artfully blow him off, so I didn't have a heart attack on the spot.  I asked him, "What happens to you when you eat nuts?"

"The tips of my ears turn bright red."

"Well, that is not happening right now, but I'll be sure to be on the lookout for it."  He smiled and sat down.  Most kids were simply alarmed that they had enjoyed a treat that contained hidden nuts.  Jack said, "I've never had any idea that these had nuts!"

I entertained the kids by showing them a picture, one by one at their tables of a wax couple - Queen and King of Hearts, that made Jack laugh so hard the other weekend I thought he was going to explode.  Got similar laughters from the children.  It was fun and calming.

The teacher returned, apologetically.  "I'm sorry it was my fault, I should have checked into it more.  He is in a nut challenge study and is building up his resistance, so this is probably a good test for him.  His nut allergy is not that bad.  It will be OK."  Whew.  I melted with relief inside and resolved to text the mom, who I knew, who was equally relaxed in return texts.  Note to self - No more Ninja Turtles at the school.

The teacher also said, "I can't believe you even came, you're a doctor!"  I embarrassingly replied, "Yes, so you trusted me, about the nuts.  Because I'm a doctor!  That makes it even worse."  She laughed.

As I drove back to work I realized I had left the balloon in the classroom in my tizzy and called the school to tell them.  The secretary said, "Thank you so much for calling.  I'll run get it out of there right away."  I imagined my beautiful balloon as a menacing creature in disguise, exploding into tiny suffocating bits that were about to fly directly into each child's larynx, creating mass chaos and asphyxiation.  I hoped she would get there in time.

It was hard for me to get back to work - the experience was so traumatizing.  I texted my friend about it, "I think they might call me in on the child abuse hotline.  Next birthday I guess I'll just bring a carton of cigarettes and a case of beer.  I've set an awful precedent.  I'm THAT mom."  He and my partners empathized and laughed.  "You're experience is so 2013.  So different from when we were growing up."

I recall back when my kids were 3 and 5, at Montessori School, I had a rare fit of baking resulting in peanut butter balls.  I used the wrong chocolate that melted at room temp.  I proudly brought them to school, freshly refrigerated, only to be turned away with consolation and mild reproach.  "This is a peanut-free school, remember?"  Fail.  It was winter, temps in the 20's and 30's, so I kept the peanut butter balls with chocolate that needed to be refrigerated in my car passenger seat, and ate them all over a week.  You'd have thought I learned my lesson.

I hope to in no way belittle the seriousness of peanut allergies by this post.  It served to remind me of the importance of checking in on ingredients.  We are baking a tres leche cake this weekend for a Spanish project for my daughter Cecelia, and I checked and double checked the ingredients as there is a serious nut allergy kid in her class. But I am a nut hound, and I forget.  If you look in my office food drawer right now you would find almonds, pistachios, and pecans.  I apologize for any perceived but not intended insensitivity and understand the seriousness of the topic, but found the incident today quite amusing, with a luckily happy ending.  Here's to the King and Queen of Hearts.  Who look as alarmed and upset as I did, when I found out about the hidden nuts. 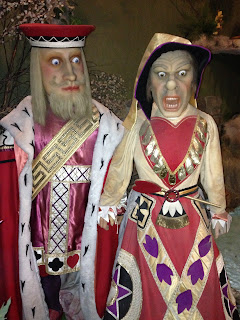