I let a patient do my hair. 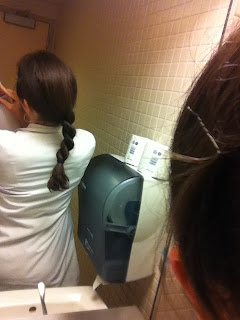 This is not a level of intimacy with which I am that comfortable, but when it became apparent within minutes of starting our appointment that she was not going to Let This Go, I acquiesced.

I was running late, and the messy braid running down my back was obviously going to be a barrier to our getting through a few important issues in this otherwise routine follow-up visit. Before you go thinking this is terribly creepy or whatever - she identified herself as a "trained beautician" who wanted to make me look "as beautiful as the pastor's wife".  Fine. Fine. FIX ME.

I doubt very much any of my male colleagues would have allowed this to happen. I speculated as to if female physicians in other fields would have consented to an exam room "make over". Do patients ask to re-do the surgeon's hair? The psychiatrist's? Surely not. Eventually, as she was still twisting my hair this way and that, I rounded my way to the realization that few, if any other female physicians would find themselves in this position.

This might, in other words, be a me-specific problem. And I am wondering if I should be bothered by it, because, aside from feeling a bit bashful at the time, I'm not. I just hope years of medical training and motherhood aren't eroding an occasionally whisper-thin sense of self-preservation.

But hey, even if they are, I still got a new hair-do that earned me some compliments later in the afternoon. Self preservation? Ah, just FIX ME.

Posted by The Red Humor

Email ThisBlogThis!Share to TwitterShare to FacebookShare to Pinterest
Labels: The Red Humor