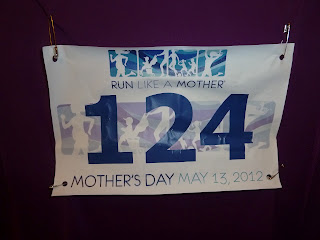 A couple weeks ago, as I was reading the Sunday paper (yes, how 1989 of me),  I saw an ad for a Mother's Day 5 K called "Run Like a Mother."  A Race for 'women only' to celebrate health and motherhood, on Mother's Day. This seemed like an awesome idea, so I called up my running buddies and we made it a date.

The race was happening in a beautiful horse farm that has been converted to a park. What a great way to spend Mother's Day morning, we thought.

Last night as we began to check the weather though, we got a little concerned.  The forecast called for heavy rains.

Whatever.  A little rain wasn't going to slow us down.  I've run many races in the rain, as long as you avoid the big puddles, it's really not a big deal.

As I pulled into the park this morning, I began to have my doubts.  As we gathered at the staring line,  a downpour began.  Next I realized that we weren't running on pavement, we were running through the field.

My shoes were sloshing, my socks soaked to the core as I rounded the first turn.  At times, I was running in 6 inches of water.

This was not what I had signed up for.

As me, my friends and 200 other crazy moms continued the race, we found our stride. The scenery was beautiful even in the rain. Faithful dads and tots stood with their umbrellas, cheering us on at the halfway mark.

It was definitely a unique experience: how often do I run through a horse field in a downpour?
As I rounded the final stretch with the finish line in sight, I realized that even in my cold, soggy state I was having a blast.

This race to celebrate Mother's Day turned in to a perfect analogy for motherhood itself: it's  messy, much harder than I thought I'd be, but exhilarating and totally worth it in the end.

What was the best part of your Mother's Day?

crossposted at thepregnancycompanion.com
Posted by RH+