Sometimes, I am jealous of my husband's relationship with our daughter. They play games I don't follow, tell inside jokes, and make up words. Neither cares if the beds are unmade, there is applesauce on her shirt, or if daddy hasn't shaved in weeks. They have the same goofy sense of humor. I have been described as many things in my life, both positive and negative, but "goofy" has never been one of them.

But lately their relationship has been strained by our daughter's insatiable interest in all things "girlie" - princesses, fairies, pink ruffles, dresses, dance shoes, jewelry, etc. My husband threw an adult tantrum when she refused to go to the park with him because she would have to take off her "dance shoes" ballet flats with rhinestones pasted on- a big no-thank-you to my mom....), which are not to be worn outside. We created that rule thinking it would limit her wear of the shoes, never anticipating she would instead opt out of playtime with dad. He threatened to throw out the dance shoes and all her dresses if she did not take them off immediately and come outside. Predictably, she burst into tears. Even though I know he is just upset that he could be losing his best little buddy, I got annoyed at what I judged to be a total over-reaction.

With Halloween coming up, my husband wanted to circumvent the possibility she would insist on dressing up as something he found unbefitting his exceedingly bright daughter. He proactively found and purchased this: 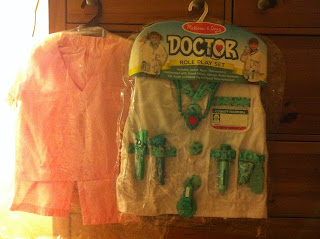 For some very muddled reasons- that I will attempt to clarify here- I think I would be more comfortable if she were to dress up as The Supreme Fairy Queen from the Land of Helpless Dimwits and Antiquated Ideals of Feminine Virtue than wear this outfit out on October 31. The fact that my husband will be out of town, leaving me alone to parade my daughter around the neighborhood dressed up as a mini-me, certainly isn't alleviating my discomfort.

And to be fair, I think I should mention that last year we dressed her up as an astronaut and the year before she was a zookeeper. At age 2 1/2, she takes swim lessons and Spanish classes. Next year we hope to start her in Mandarin and ballet. We have chosen to pay more for what we believe to be a better preschool. In short, we are exactly the sort of middle class people with high parental expectations to which this sort of merchandise is marketed.

So why does this costume make me feel so, well, squeamish?

I guess some of my unease is easily explainable. I know way too many physicians who dislike our profession, a profession that was chosen for them by their parents. I vowed long before I became pregnant that I would never pressure my child to enter medicine. If he or she wanted to go to medical school, they would do so with a more complete understanding of the life of a physician than I had when I made the same decision.

But there is just something about medicine that makes parents think "it will be good for her", just like Mandarin class I suppose, and results in some obedient little children being pushed into a career that is just too demanding when pursued on a parent's behalf. It is perhaps internally inconsistent that I am completely content to be the mom with the vocabulary flashcards but am emotionally tortured by even appearing to pressure my daughter into medicine.

I may not be a perfect parent (and truthfully, some days I am just shooting for "acceptable") but I hope to encourage my daughter to contribute to society in a manner of her choosing that that fulfills her emotionally and intellectually. If that isn't in medicine, than at least she won’t incur as much educational debt as I did.

And we might have found a solution to my mini-me misgivings. She is very excited about the doctor's costume, but wants to be a "dancing doctor". Since my husband will be out of town, I might just let her pair her coat and scrubs with those rhinestone encrusted shoes. And some fairy wings.


s is a heme/onc fellow in California. She blogs at http://www.theredhumor.com/
Posted by KC