A Day at the Arkansas State Fair

Snapshot.
Here is my daughter, Cecelia (oops- Ce-Silly). Eight years old. Dark brown shoulder-length hair, chocolate brown eyes, and olive tan skin. We are standing at a monkey show, one that she reluctantly agreed to attend after a picnic lunch of corn dogs and french fries on the asphalt, to let our stomachs settle before going on more stomach lurching and inner-ear challenging rides. The monkeys and their trainers seem to be high quality - having appeared on Letterman and being stars in all the big movies, but we are still crowded, standing beside over-stuffed primitive bleachers in the hot 90 degrees October summer sun, smelling the strong animal dung from the adjacent barns housing the prize animals from around the state.
Her lack of interest took a turn when the beautiful female trainer with the exotic accent asked for a child volunteer from the audience. I laughed internally watching her jump up and down, flailing her hands wildly in the air. So opposite me at her age - I would have been hiding behind the bleachers hoping not to be noticed. Her 6 year old brother with his dirty blond hair, hazel eyes, and devilish good looks was jumping and pointing at her, an exaggerated clown, in attempt to help her realize her ambition. We recently took our first (and maybe only) trip to Walt Disney World, and all her efforts to be a part of every show we watched ended in vain. So I was pleasantly surprised when the trainer turned to her and said, "You, in the pink shirt. You are going to be in our little movie." Cecelia was clearly over the moon.
She sauntered front and center and was given a safari hat, asked her name and age which she proudly provided without a hint of embarrassment in front of the 100 plus audience, and told to go back to her family, Jack and I, until she was needed. On the sidelines she spun around in circles smiling, metal braces glinting in the sun, wondering aloud what she would be called upon to do.
She didn't have to wonder long. Soon she was back in the limelight, caught up in an elaborate show involving a dog, a monkey, and lots of animal tricks. She took all attempts by the trainers and the animals to surprise her in stride, flummoxing and impressing them at every turn. Happily adoring the large dog that licked her in the face. Following instructions to allow the animals to shine. Bowing not once, but three times with flourish when the show was completed. A mom on the bleachers nearby leaned over to me. "Your daughter is adorable. What a ham. Where does she get it from?" I smiled at the mom and hugged Cecelia, she was returning to us, complimenting her for her bravery when the large baboon with sharp teeth put his arms on her shoulder to smile for a photo op. Her smile was bigger.
"Mom, that was the best experience ever. I can't believe I didn't want to do it. I can't wait to tell my teachers and my friends. Can I bring pictures to school Tuesday? Will you get them ready for me?"
I put my arms on her and Jack's shoulder and we walked over to the Gravitron. That's what they used to call it anyway, these days it's the Starship 4000, I think. It's the one that spins you so fast you lose gravity, and the kids remembered it fondly from last year. Our stomachs were ready, and we rode it three times before moving on.
Thursday night I was lying in bed with Cecelia, her turn for snuggle time. She was discussing a book she recently finished and was re-reading already. The Girl Who Could Fly, by Victoria Forester. I laughed. "Usually I wait a few months at least, for the re-read." She passionately responded, "No, you don't understand, Mom. This book is incredible. It made me happy, and sad, and scared. You can't understand, no way, unless you read it." I smiled, and assured her I could. Thought back to one of those rides, where our bodies were being thrown around mercilessly, and I was staring at the sun to fixate, beaming blissfully, having recently lost the concern that one of my kids might not be enjoying the ride since they are both new found professionals at this. Thinking proudly that life is a ride; books, shows, school, work, and all, and I was preparing them well. I know, it's an old cliche. But watching your kids start to figure it all out makes it seem like a brand new wonderful lesson. 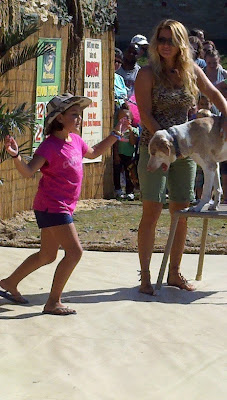