My secret life of blogging

Ever since I was a little kid, I always wanted to have a diary.

When I was about eight years old, my grandmother bought me a little pink diary. With a lock and key! And multi-colored pages! I was so excited, I started writing in it immediately. However, I recently rediscovered this diary and found it was a mish-mosh of entries every 3-6 months, mainly focusing on either my latest math test or my latest crush. I guess grade schoolers don't have that much to say.

During college, the internet was becoming pretty big (although clearly just a fad), and I found a few interesting blogs online. In the midst of studying for my midterms during sophomore year, I decided to give it a go.

Everyone I knew was informed about this blog, which was how I found readership. My parents would make comments like, "You sound a lot more bubbly and happy on your blog than you do in real life." (In real life, I'm apparently chronically depressed.) My blog was also a good way to inform my boyfriend that I was pissed off at him. But for the most part, the entries were shit: brief random musing that had nothing to do with anything. This is a sample entry, that I presumably wrote after learning about Mendel and Martin Luther:

Monks have made a lot of important contributions in history. So I don't want any more monk-bashing, ya hear?

But somehow knowing people were reading kept me going and I wrote in the blog all through college. Then in med school, I took my blog offline, but I kept writing. And now I wrote in-depth entries about my experience going through the oft-times fun but mostly pretty horrible training process. (Anyone who says "I love med school," just know that I hate you. You and med school should go get a room.)

After med school, I discovered Livejournal, and I moved my blogging over there. It has a great format in that not only can you lock individual entries, but you can filter entries so that only a handful of trusted people can read the more personal, gut-wrenching stuff. I've been blogging there for the last five years, with all entries locked. That way I don't have to worry about that thrill of fear in the pit of my stomach when a colleague or family member discovers my blog.

It's nice to have a public web presence though, which is why I like blogging for Mothers in Medicine. But does my family know about it? Other than my husband, no. There have been tons of times when I wrote an entry that I would have loved my mother to see, but then I realized that if I showed it to her, I'd have to constantly be censoring myself here.

I do censor myself somewhat though. It's a mistake to think that anyone on the internet is completely anonymous. Whenever I write an entry, I ask myself if I would be in any trouble if everyone I knew saw this entry. If the answer is yes, I don't post it. A few times I've complained about resident colleagues on here, but I was secretly hoping they'd find the entry and realize what a dick they'd been.

When I started my cartoon blog, I fully intended to tell my parents about it. However, I showed my father, a psychiatrist, this cartoon and he declared it "not funny." I decided that I'd prefer to stay anonymous than deal with any more negative critiques. My husband reads the blog though and he says he appreciates my "really immature sense of humor."

I think the best thing about blogging is looking back on old entries. After my intern year, I went back and collected all the entries into a book, which I published on Lulu for myself: 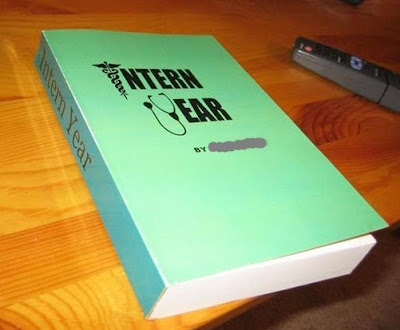 Recently I was having lunch with some friends and one of them mentioned the idea of starting a travel blog and was looking for advice. I kept my mouth shut, not mentioning that I contribute to three blogs. If I go around telling people that, I may as well tattoo a big L on my forehead. So really, it's my little secret.... not so much because it's scandalous, but more because it's a little embarrassing.