I've now been an attending for less than two months and I've received all of the following comments*: 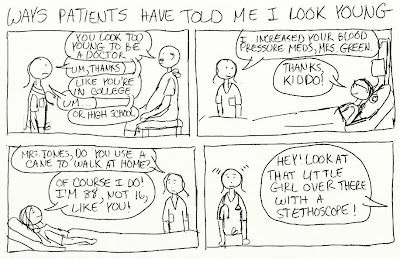 The latest was yesterday, when I asked one of my patients if she recognized me and she said, "Of course. You're that little one that everyone thinks looks like a student."

My usual response is, "I'm older than I look." Inevitably, the patient will then ask me how old I am because when you're either older than 80 or younger than 10, you can ask whatever the hell you want. My reply is, "I'm in my thirties and I have a child." That usually satisfies them.

Now don't get me wrong. I like being told that I look young. What woman doesn't? I mean, if it really bothered me, I'd stop yanking out those gray hairs, right? Sure, we sit around and complain about how "annoying" it is when patients tell us we look young, each trying to top one another with our stories. One of us will complain that a patient thought she was in college, another will complain a nurse thought she was a high school student, and another will say that at her last delivery, nobody could tell her apart from the newborn. We're all secretly flattered though, trust me.

I've also noticed that men don't complain nearly as much about being told they look young, possibly because the Doogie Howser comments actually bother them, not just fake bother them like us.

So in summary, I don't mind being told that I look young. (Or thin. That's okay too. Thanks, Woman With Hip Replacement.) But I am bothered by the lack of respect that seems to accompany some of these comments. When an inpatient I've been seeing for weeks calls me "kiddo," that makes me think I'm not being particularly respected.

I suspect it's a matter of confidence. Confidence makes you seem older. As a brand spankin' new attending at an unfamiliar hospital, my confidence is not super high and I'm not good at faking it.

I'm not sure what I can do to build my confidence. I see other physicians (usually men) who have less experience than me under their belts saunter into the room and act like they know it all. Do they truly think they know it all? Do they know more than I do?

And then I see other physicians, older ones, who are so effortlessly confident. They know the answer to every question I ask... or if they don't know the answer, they can tell me why there is no answer. I wonder if I'll ever be like those attendings and have that level of confidence and knowledge. Is it just a matter of time and experience? When does it happen?


*Cartoon cross-posted to my blog, A Cartoon Guide to Becoming a Doctor
Posted by Fizzy