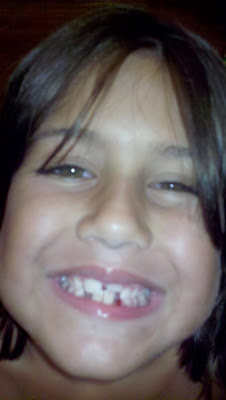 On the first day of school eve, Sicily lost a tooth. Her sixth. I say sixth, she says seventh. She is convinced that there was a third in her top two front that just isn't growing in a new one because there is no room. I can see her confusion - the little snaggletooth.

I got up early to run and dress nicely in a skirt and blouse - I wanted to look good for them both. Wandered into Sicily's room at 6:45 to wake her.
I sang a good morning song, one that my Mom sang to me when I was little. Peppy and light.
Sicily (7) rolled out of bed, sleepy-eyed and disheveled. She reached under her pillow and seemed unimpressed by her tooth fairy money - an amount that would have staggered me when I was little. She announced her breakfast choice at my urging, got moving, and I went into her little brother Jack's (5) room.
Another round of the good morning song. Jack squinted his eyes, looked up at me, and announced that he wasn't going to school. "Jack H. won't be there." His best friend from last year transferred to a new school, and he was sad. He injected the emotion into the morning. He refused to eat breakfast, announced he would not get dressed, and retired to his closet cross-legged on the floor in his underwear. I sighed, still trying to be cheery, and went to find Sicily.
Sicily was lying supine on the couch in the kitchen, rumpled in malaise. I chided her to get up, brush her teeth, brush her hair, and get her shoes on. While I was juggling breakfast and Jack's foul mood, I heard a wail from Sicily's room. It seemed that the shoes she had bought with my Mom less than two weeks earlier didn't fit, and there was no other option. I discussed with her the fact that new shoes sometimes need to be worn in, but even without the shoelaces she decided she couldn't even take two steps. So I wrote a note to her teacher promising to address the problem in a timely fashion and put her in forbidden crocs.
I asked her, "Sicily, would you please try to cheer Jack up while I am fixing breakfast? Help him get excited about his first day of school?" I had checked - he was still sulking in his underwear.
"How can I get Jack excited when I'm not? My best friend is in another class (she had seen it on the roster). I'm miserable."
Whew. This was not the way the first day of school was supposed to go. I marched into Jack's room and got tough. He was whining and begging me to put his clothes on. "Jack. You are five years old. You can get dressed yourself, or go back to the pre-school class and take naps. If you can't get ready, I will take away tickets and you might not get to pick out of treasure chest on Friday."
They finally made it to the breakfast table and we had a short reprieve of happiness and interested guesswork about their new year as they both ate a hearty breakfast. Then, as I was trying to find my pager and get the camera for pics, they dissolved into picking at each other and fighting. Sicily refused to be in a picture with Jack, and he howled and banged on the piano. I finally convinced her to let him be in the picture, and here is what I got: 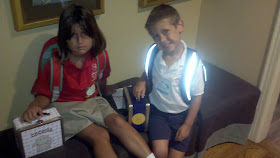 Not perfect (why is the font suddenly blue? Oh well) but I love it. That's us. Not perfect, but we do our best.
As I pulled into the carpool line both kids screamed excitedly as they recognized teachers and students from the year before. They tumbled out of the car at their respective drop-off points happy and smiling. I was glad to hear tonight that they had a great day.
Gizabeth Shyder
Share