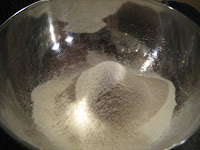 I have a confession to make - but first, a little story.
Last Friday my husband and I got to do one of our favorite things: walk our son to school, a lovely, small elementary school set amid tree-lined streets in our peaceful neighborhood.
That day we went bearing pie - home-made apple pie, to be exact, by special request, for an open house during which we would get to peruse all the kids' family history projects and enjoy culinary delights from the various cultures represented in the class.
My son had been worrying (needlessly, despite reassurance and encouragement) about this project for weeks. He was worried about getting the work done on time. Worried about messing up the illustrations. Worried about revising the final draft. Worried that I wouldn't have time to make the pie and he'd be the only little boy whose mommy was a dismal, neglectful failure.
Well, by golly, I was determined not to disappoint him, even if I had to stay up late post-call or get up early pre-call to do it. As it happened, not only was I able to make the pie at a reasonable hour, right on time for the open house, but also my call schedule was such that I didn't have to be at work till mid-afternoon on open house day, so he was able to have both parents there.
My son visited me in the kitchen while I was preparing the apples. He sometimes tries to keep me company because he's concerned I might get lonely (he hasn't quite grasped the concept of enjoying time for oneself).
"I told all my friends you make the best apple pie in the whole world," he said.
How cute is that?
"Well, that was very kind of you," I replied.
"It's the best pie ever."
"I'm so glad you like it."
Peel, peel peel.
"Is it hard to make?"
"Not especially," I said. "Once you get a feel for when to add water to the dough, and how much to add, it's not a hard recipe to follow."
Dice, dice, dice.
"Do you like making apple pie?"
Hmm. How to answer that?
"Parts of the process can be a little tedious, to be honest," I said. "But it's not bad - I don't mind," I said quickly, to reassure him.
"I love your apple pie," he said.
I never did learn in anatomy class where exactly the "cockles" of my heart might be, but they were definitely warmed.
On the day of the open house, as we approached the front lawn of the school we caught sight of other parents coming from different directions on foot with their children, carrying covered dishes and trays and plates, all heading toward the front entrance. There was something so village-like about it. A pleasing aroma of book paper and crayon drawings wafted over us as we entered the school building, making me nostalgic for my own elementary school days, when I could focus my attention, as these kids were doing, on things like "daily life in colonial times" and haiku.
The atmosphere at the open house was one of friendliness mixed with the pleased-as-punch pride of children who have done well at something. There was so much food the teacher had to set up a second table. We ate, visited the desk exhibits, mingled with parents, mingled with children; some families even visited their friends' open houses in other classrooms.
We opened our son's Family History Book and smiled as we read his tell-it-like-it-is descriptions, written in his painstaking scrawl. On the cover he had drawn a Philippine flag and a French flag, as well as maps of both countries. In the upper left corner there was a small, muffin-like item with steam rising from the top.
"That's a pie," he explained.
Several pages into the booklet it appeared again: a little pie in the margins.
My confession is this: making my husband and children happy with pie is the "accomplishment" that brings me the greatest satisfaction in life.
Even their deeply appreciative inhalations as they enter my kitchen filled with the smell of baking pie make me feel like I'm on top of the world, like I've made their day a little better. Yes, I graduated with honors from an Ivy League university. Yes, I got a medical degree. Yes, I am reasonably successful in my practice of medicine. Yes, I've had the chance to travel, learn languages, study music, get advanced degrees, receive a little recognition for things I've written, and all that. But nothing brings me greater joy than those moments when my husband and kids are eating well, savoring with relish a pie I've just made. Am I crazy? Perhaps. Crazy about them.
It's funny - cooking is, by definition, the creation of gifts that can't last. The moments we take to enjoy meals together are fleeting, as are the meals themselves. But those moments are worth the world to me. And somehow the gift does last, I think - I hope - in ways I'm sure I can't see or predict. I'm hoping that somewhere in the margins of my children's lives there will always be a little pie sketched in - an unquestioning, nourishing trust in their parents' love, a capacity for sharing and for happiness, a corner of freshness and warmth.
T.
Share