Control Freak and the Uncontrollable Birth 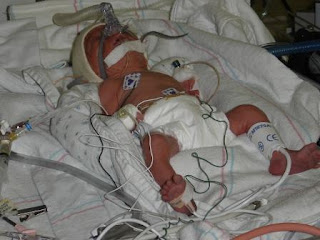 Son on his birthday...already beautiful (if you squint)

At the end of my second trimester, I was a senior resident and transitioned into the chief resident role. Our program had 30 residents, and I took the job seriously. I prided myself on never calling in sick. As I oriented the new first years, I gave them the same advice my chief gave to me on day one: If you are not an inpatient in the hospital, you are not sick.
At 31 and 3 days, I had a headache and was short of breath. I was in clinic, so I took my blood pressure at about 8:30 and it was high. Really high. As a doctor, I knew I should talk to my own doc, who also happened to be my residency director and was down the hall in her own clinic, but I had patients to see.

If you are not an inpatient in the hospital, you are not sick. I pushed through, knowing I could rest during the didactic session planned for all of the afternoon.

During the didactic session, I became more and more dyspneic, even while sitting still. Panic, I thought, and I willed myself to calm down. I wondered if I would make it to the second week of October for my due date. It's because I'm fat, I thought, cursing myself for intentionally getting pregnant at 280 pounds.

After the lectures, at about 4 p.m., I found my residency director and told her about my symptoms and my a.m. blood pressure. She got out a cuff, sat me down and took it herself. It was the same as in the morning, 220/110.

She put me in a wheelchair and sent me directly to L&D for admission, where I insisted on writing my own admission orders. Stupid, but I'm a control freak and writing orders was something I could control.

The BP had improved somewhat by the time I got to L&D. My doc consulted the perinatologist, who examined me and ordered a biophysical profile. The score was OK, so he recommended a 24h urine, a renal consult (I'd been seeing them as an outpatient), steroids and aggressive BP control. No mag yet, he said.

August 7, 2004, day three of my hospitalization. The BPP was not good, and a followup doppler ultrasound showed that the blood that should go toward the fetus was actually reversing flow. The perinatologist recommended c-section right away. I asked if an induced vaginal birth would be OK. He actually laughed.

This is not what I had planned! I'd planned an epidural and a beautiful vaginal, family-centered birth experience in October.

My favorite OB senior resident did the surgery, and my favorite family med intern (who happened to be on her gyn month) assisted. My husband must have wanted to die, but he sat calmly at my side, stroking my face, telling me he loved me.

When they briefly showed him to me on his way to the isolette, he seemed bigger than I'd expected. I heard his cry and immediately gave a prayer of thanks. Two hours later, I got to hold him in the NICU. He was 3 pounds 7 ounces and doing well on a CPAP.

Back in my room, I developed four beat clonus and got to experience mag sulfate for 24 hours. Yeah. That sucked, but now as much as not being able to see my kid.

Husband stayed with the baby and visited me every now and then to give me updates and share the digital camera with me so I could see my boy. Mom and my mother-in-law, both RNs, provided personal bedside nursing.

Another senior resident came and physically removed my beeper from the room. "Don't worry about us," she said. "We'll be fine." And they were...turns out they didn't need me at all. Go figure. And here I thought I was the center of the universe.

I went home on day three, then went with Husband to the NICU every day, 7 a.m. to 9 p.m., to care for our new son. He was a "feeder-grower" and never required intubation, antibiotics or other special care. Sister went nightly at 9 p.m. to rock him and feed him until midnight. On day 28, he came home.

His birth, while scary at the time, is the best thing that ever happened to us. Next week he'll be 4. He's still beautiful... and now bright, funny and well-adjusted. There is not a day of his life that I would trade for anything.
Posted by Fat Doctor