Following in my footsteps.... 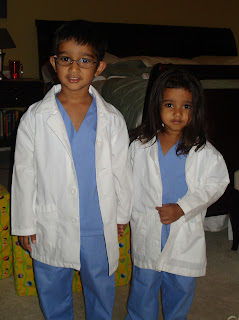 ...by compulsion. For the record, the pictured garb were provided by my father. He is a doctor himself, and had to have the grandkids participate in his medical clinic-sponsored float during our home town's fall festival parade.

So literally, I was parading my kids around in these.

Although I don't have expectations that my kids will become doctors, it would be nice to think that, should they opt to go that direction, I inspired them that way. Of course, my husband is a physician too, so it would technically be difficult to tell who was the primary influence.

Okay, I'll admit something. I not only kept my last name upon marriage, but tried to persuade my husband to adopt mine. This was not a battle that I won, nor did I really expect to. I just thought it was worth the argument.

Sometimes, though, I think about what the difference would have been if things had gone that way (indulge me for a minute in some unladylike egotism). My kids would bear my name, and if they became doctors, they would be the next (third) generation of doctors in my immediate family with my surname. If people called me and asked for Dr. ______, I might have to ask clarification for which Dr. ____ (and yes, I realize this would also have been the case had I taken my husband's last name, so don't bother pointing that out, that is not the point).

Mothers are not so different than fathers, after all. Sometimes we just kind of want our kids to follow in our footsteps.

It's a shame though. I guess the world will have to do without two more "Dr. Singh"s.
Posted by pathmom

Email ThisBlogThis!Share to TwitterShare to FacebookShare to Pinterest
Labels: pathmom, the doctor mother